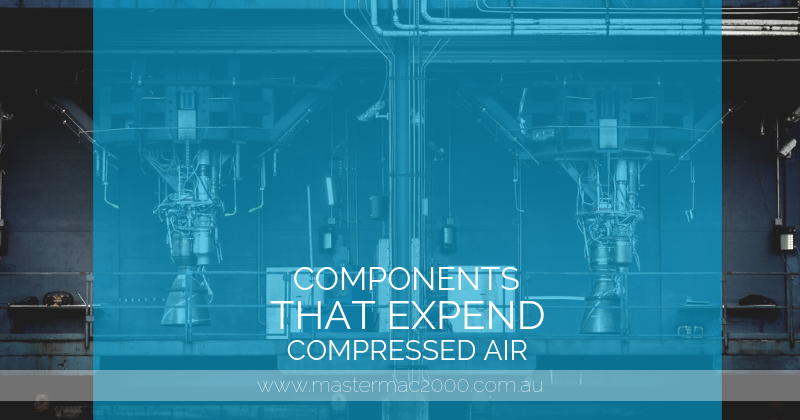 Assistant valves, directional control valves, and execution valves (cylinders) are the components that consume compressed air. Let us identify each of them.

Flow-control valve. Formed by a variable throttle and a non-return valve.

What ensures the flow of air between air ports by switching, opening, and closing their internal connections are directional control valves. They are classified through determining the number of ports and switching positions, the valve’s methods of operation, and its normal position.

2/2 Directional control valve. It’s the valve with the simplest structure. To open and close the valve, it uses the thrust from the spring. This stops compressed air from flowing en route to the working tube from the air inlet. The pressure control valve can be driven either mechanically or manually.

3/2 Directional control valve. This valve can be used in controlling single acting cylinders. How does it work? The open valves located in the middle will close until the inlet and the working tube are connected together. They can be driven pneumatically, manually, mechanically, or electrically.

5/2 Directional control valve. In this type of valve, the pressure pulse is fed into the pressure control port inlet to move the spool to the left, connecting the inlet and the work passage. The work passage will then release air through the air exhausts. Until signals of the contrary are received, the directional valves will remain in this specific operational position.

Single acting cylinder. It’s the kind of cylinder that has only one entrance where compressed air is allowed to flow through. The piston rod is pushed in the opposite direction by a spring inside or by the external force brought about by weight of a load or mechanical movement.

Directional acting cylinder. In double acting cylinders, air pressure is worked alternately to the surface parallel to the piston. They produce a drawing force or a propelling force. And since the piston’s effective area is small, the force generated during retraction is rather weak.

To learn more about this topic, contact us at Mastermac2000.com.au.