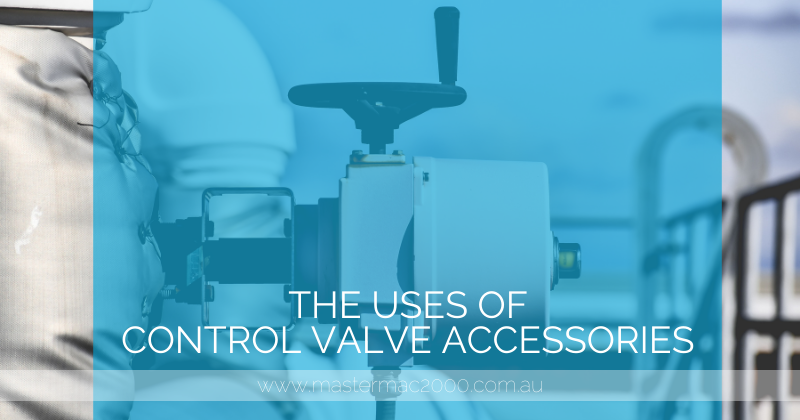 In machines, some of the variants of control valve accessories are very important that affect their processes and performances, including positioners which are considered main accessories. Valves that are pneumatically operated depend on them to take an input signal from a process controller and transform it into valve travel. Another significant kind of pressure control valve accessory is called a solenoid valve manifold. What determines their selection are the desired failsafe operation and actuator type. Such solenoids can be utilised on single-acting diaphragm actuators or double-acting pistons.

Limit switches have close relationships with control valves. They operate distinct and separate inputs to distributed alarms, control system, electric relays, signal lights, or small solenoid valves. Those that are cam-operated type are generally used with two to four individual switches that are operated by the valve stem’s movement. The switches can be located at the assembly that is mounted on the side of the actuator. And each of these switches can be adjusted individually and supplied for direct current or alternating current systems. There are other valve-mounted limit switch types that are also available.

Then there are airsets that are also called supply pressure regulators. They help reduce plant air supply to control equipment, including valve positioners. 20, 35, and 60 psig are common reduced-air supply pressures. And it is the regulators that mount essentially to the bolts or nipple-mounts or positioner to the actuator.

With regards to pneumatic lock-up systems, they are used together with control valves to lock in existing actuator-loading pressure during the occurrence of supply pressure failure. These mentioned devices can be utilised with volume tanks to fully open or close the position of the valve on the loss of air supply. Once the supply pressure is restored, normal operation proceeds automatically. When using diaphragm actuators, control valves follow similar functional arrangements.

Another pressure control valve accessory that uses a nozzle-flapper, pneumatic relay, and torque motor and receives direct current input signal to convert the electrical signal to a pneumatic output signal is the electro-pneumatic transducer. It is the nozzle pressure that operates the relay which is piped to the torque motor feedback bellows to give out a contrast between the nozzle pressure and input signal. This transducer can be firmly fixed on a control valve directly. It will then control and operate the valve without the need for additional positioners and boosters. In terms of electronic control loops, electro-pneumatic positioners are used to operate control valve actuators.