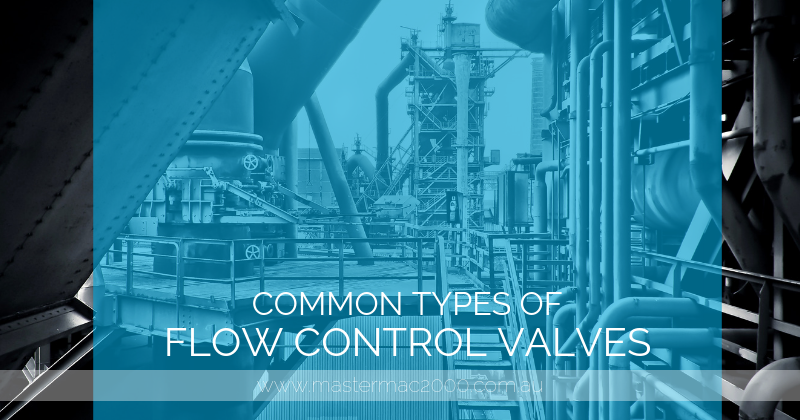 Numerous types of flow control valves are used in different applications and industries. They vary from being simple to sophisticated, and some are complicated enough to adjust temperature and pressure variations automatically.

Check out the most common flow control valves:

Globe valves. This type of valve consists of a stationary ring and movable disk-type element seat in a spherical body. This is different from ball valves as it is used to start, stop, and regulate flow in a pipeline. Globe valves operate in a linear motion and close via a flat plug or convex bottom that is lowered onto a horizontal seat. Also, the plug raises when a user opens the valve to allow fluid to flow.

Gate valves. Generally, these valves are primarily used for non-throttling service and applications that require a straight line flow of liquid with less restriction. When operating gate valves, you’ll have to rotate the stem in a counter-clockwise motion to open it and a clockwise motion to close the valve. And when an operator moves the stem, the gate moves up and down on the threaded step.

Pinch valves. These are ideal for applications of liquids or slurries containing large amounts of suspended solids. These type of valves seal one or more flexible materials such as rubber tubes that pinch to turn off the flow of liquids. The only wetted part of the valve is the rubber sleeves. Their flexibility allows these valves to close tightly entrapping solids.

Needle valves. These are volume control valves that create a restriction flow in small lines. Fluids that go through these valves turn 90 degrees and flow through an orifice that serves as the seat for a cone-shape-tipped rod. When the user operates the cone on the seat, the orifice changes in size. Needle valves are similar to globe valves as they share a few features and benefits.

No matter the type of flow control valves, they are all designed to regulate the pressure or flow of fluids and they react to signals created by temperature gauges or flow meters. It is essential to use these valves to their specific functions to avoid any problems.